If you are looking for the My Pink Stampers Blog Hop
scroll to the post after this one or click HERE
Yesterday my dogs were groomed and Kyla, my Shi-tzu/Maltese mix, has the longest eyelashes that I love so I told them to trim them but not too short.  Because one grooming session they were stubs and I wasn't too pleased, luckily they grew out.  Anyway, so I want them trimmed but left a little longer so that you can see them.  So I go to pick her and Tavis up at the groomers and realized that they didn't trim them at all.  My dad calls them hooker eyes.  It's hilarious.  They are so long and they sweep off the side.  I took a pic of them: 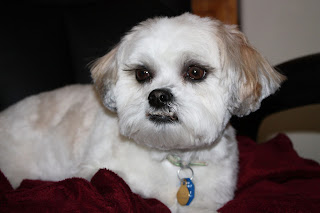 Click on the pic so you can see them up close.  She is just too cute.  So then I go to take a pic of Tavis and he HATES getting his pic taken.  He sees the camera go up and he turns his head.  I finally got one of him, it's a side pic of course: 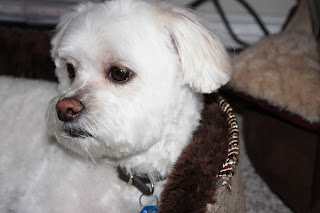 Now on to the funny stuff.  Here is my first pic of Tavis (Can you tell he hates his pic taken?): 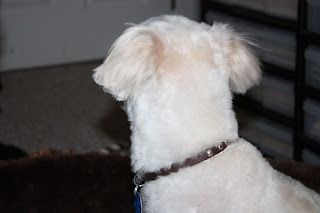 And this is my first pic of Kyla when I said 'Let me see those pretty eyelashes pretty girl!': 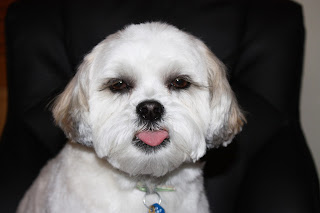 You can see her eyelashes really good in this one too.

Wow, those are some amazing eyelashes!! Too cute!

Oh my gosh, those eyelashes...... your dogs are adorable, love the pics, TFS!!!! my dog hates the camera too, my moms dog wouldn't look at me for 6 months because I took his picture, they are sooo funny....

So cute....love the last photo!

Those are incredible eyelashes. To think of the amount of mascara I use in an attempt get eyes that look that good and I don't even come close :-)

OMG THAT IS HI LARRY US!!!!! I laughed out loud at "hooker eyes" sooo funny! She is ADORABLE!!! I have a shih tzu too! LOVE the eyes!
Hugs~Raechel

love your fur babies :P they are so adorable and look so handsome after that cute grooming :P

Whoa! I've never seen lashes so long. Beautiful! Thanks for sharing your precious babies with us. We can't wait to get dogs again, but have to wait until we get to Alaska and are in a house or apartment that allows them. Love your blog wallpaper.... I'm going to have to remember this one for the next time I change mine. :)

Oh my gosh Pam...that last picture with the tongue sticking out absolutely cracked me up! LOL What precious furbabies you have!!! Our rescue dog Muffin has the same thing going on with her eyelashes. (she's a mixed breed...looks a bit like your doggies).

Love all your pictures! TFS!

I have two girly girls, but the poodley one has the lashes going on!

I got the smiles and giggles looking at your cutie-pie kids. Just gorgeous!

SO CUTE!!! Isn't is wonderful to have animals? I would NEVER give my babies up for ANYTHING! They always know how to make you smile!

Your puppies are the cutiest...I love my dogs too! PS you are very talented...love your blog.

I swear one time the groomer put mascara on my poodle! Her eyes were gorgeous as are your baby's!!

Oh man, they are SO sweet! I LOVE them. Her eyelashes are SO LONG!!!! Hugs- Glora

Cute pup! We have a male shitzu so no cute eyelashes!

Congrats!!! I have awarded your blog the stylish blogger award. Visit my blog for more details. http://cestla-viedesigns.blogspot.com

ROFL!! WOw, by the last pic I could really see what your dad meant! Please tell your doggie I am jealous of those gorgeous lashes & I'd lone to know if it's maybelline? Thanks so much for the laugh!

WOW!!! Amazingly long lashes!! I love the pic with her sticking her tongue out! Too cute. (I know it was a quick pic of her as she was licking her lips). TFS