Happy Tuesday!  For my Creative Critterz Imaginations design team post we are asked to make Thanksgiving table decorations.  I decided to do a table setting.  What I ended up doing is REALLY simple.  I used Create a Critter for the leaves and the Heirloom Imagine cartridge for the patterns.  This year there are only 4 of us that will be at Thanksgiving dinner so I wanted to do something a little special.
Here is what the setting looks like: 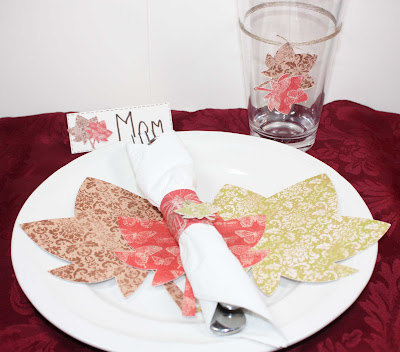 For some reason the middle leaf is coming off orange in the pictures.  It's actually more of a maroon color in real life.  :)
Here is a look down at the plate.  The brown and green leaf is cut at 7", the maroon one is cut at 5.5".  I cut a band w/ the maroon paper and put it around my silverware and then wrapped some linen thread around that w/ a green leaf cut at 1.5" to hang from it. 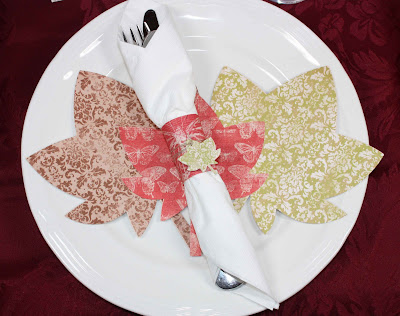 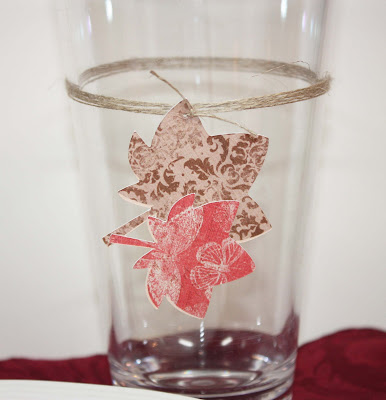 Thanks for stopping by!  Remember I will be having a giveaway that I will be doing later this week on my blog.  Be sure to stop by.
Project Recipe:
Create a Critter Cricut cartridge
Heirloom Imagine cartridge
SU! - Linen Thread & Chocolate Chip marker
White cardstock
Posted by Simply Pam at 7:00 AM

Very pretty. A perfect table setting for Thanksgiving. I love beautiful Heirloom patterns on the leaves too. Hugs- Glora

Its so lovely Pam! I LOVE that you decorated the glass as well!

This is beautiful! You are so talented! I'm looking forward to your next challenge. :)

Such a lovely table setting! Love the patterned leaves and decorated glass!
Glenda

Gorgeous table setting, I love all the details - just perfect!

I stumbled across your blog tonight, and I have to say that I love these table decorations. I am the designer that created the Heirloom patterns and I love how used them in your place setting. Would you mind if I shared this project on my blog?

Great to know about these table decorations. Last month, I arranged my sister’s wedding reception at one of beautiful NYC venues and decorated table with beautiful table centrepieces. We really had an amazing time there.