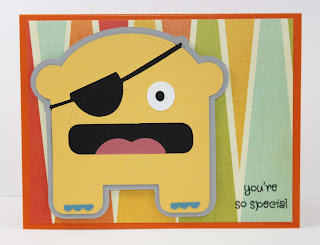 I made this card for my brother Ster who is on his mission. In all his 24 years he has never had to have surgery. Within the last year while he has been on his mission he has had 2. We just think it's hilarious. :) So his latest one was a type of eye surgery. He had some bump in his eyelid and had to have it removed. When the doc took it out he was surprised and said 'This isn't what we were expecting. Hmm... We'll have it tested" And that was it. No other information. So he gets his test results back later this week. We're not worried. We know everything will come out normal.
Anywho, when I was trying to come up with a card to make I saw this little guy on the new Mini Monsters cartridge and just had to make it. He's wearing an Eye Patch! Perfect! :D The orange base cardstock is from SU! The designer paper is from the Sassafrass Monstrosity paper pack. I just had to use some paper from that stack considering the little monster I made. The paper for the monster was just basic cardstock from Roberts. I'm not sure where I got the stamp from. I think it is one of those Hero Arts mini stamp sets but don't quote me on that. :D
Posted by Simply Pam at 9:37 PM

I just want to shout Aye Aye Captain...that is really a stinkin' cute card. I love it!

so simple and so cute! I think he'll crack up when he sees it. TFS!

the card is lovely and cute. tfs!

He He, too funny. He will love it!

Too cute! Nice use of the stamp.
- Rowena

That is too funny picking on your brother like that. LOL GREAT image you chose for him. Love the look on the monster's face. LOL :) Janis

This lil monster looked like my husband last month after he had cataract surgery. You should have seen all the pirates in the waiting room the next day waiting for their follow up visit! We all had a good laugh!
Very cute card!
Hope your brother is doing well.
Lucy Lam