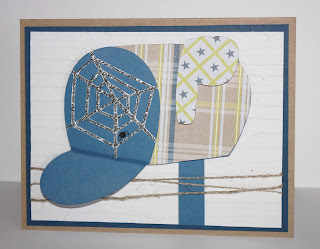 Here is a card I made for my brother who is on his mission. He's been promising to send me a letter since he's been out. He's been out a year and nothing. I understand why he isn't writing, he doesn't have the time. Then he was transferred to another area the week of my b-day so he missed that. So I made him this card as a reminder and as a joke. Thought it was funny. :) I did get a letter from him a week after my b-day. Better late than never! :)
I used the Doodlecharms cartridge for the mailbox. I added the post to the mailbox myself. The spiderweb is from the Mini Monsters cartridge. I added silver stickles to the web. I added a little spider w/ a black marker. It just needed it. :) I then used the Versamarker on the crease of the mailbox door to add extra embellishment. The designer paper is from the Making Memories Just Chillin' designer paper pack. I embossed the background w/ the Distressed Stripes Cuttlebug folder. Also used was twine and PTI paper.
~ Thanks for looking!
Posted by Simply Pam at 8:18 PM

Ah sweetie. I saw this on my dashboard and I got a little tear. How sad for you. This card should definitely get the point across. I love it!! I might just have to scraplift it to send to a few of my friends that are s-l-o-w in writing back! Have a great day and I hope the mailbox fills up soon!

So sweet! Love the story behind it!

This is too funny. You pick on your brother so much. You guys must be really close. Sweet! :) Janis