Hi Crafters!  I have an unusual wedding shower card for you today.  My cousin is getting married and our family shower for him and his fiancee is this weekend.  Once I heard he was getting married this card idea came to my mind.  He is a big Star Wars fan and also loves pretty much anything sci-fi and gaming.  So the idea of Han Solo and Princess Leia as the ultimate couple for their card.  :)  I was so grateful I found a cut!  This image actually did have Luke Skywalker also on the cut but I just cut him off.

Oh btw, what gave me this idea besides knowing that he liked Star Wars is he posted on Facebook once saying he was so grateful for his fiancee who would come over and do Star Wars trivia when he was having a bad day.  How cute is that?  :) 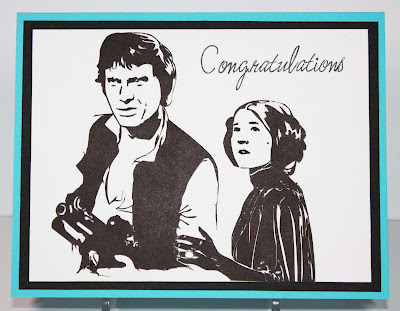 To see the original cut go HERE.  It is on the letter V.  I flipped the image so the hand that is showing would be her left hand.  That way I could add a little bling for a wedding ring.

I've never cut out dingbats before.  What a challenge for something that has tiny cuts and so many!  Thank goodness I have a Silhouette for this.  Hardest challenge?  The faces.  The cuts were SO tiny!  So this is what I did.  I put the following face cuts back into their original place.  Then for cuts that were big enough I put glue on the back and then placed them back into the face like a puzzle.  That way I knew where everything went.  For the pieces that were just too tiny I grabbed a black marker and just colored in the lines on the "puzzle" piece.  Hopefully that made sense.  :) 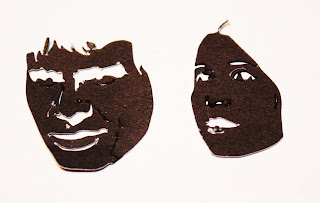 Oh, from what I can tell from their invitation I believe that their colors are teal and black.  We'll see in a few weeks at their wedding.  :) 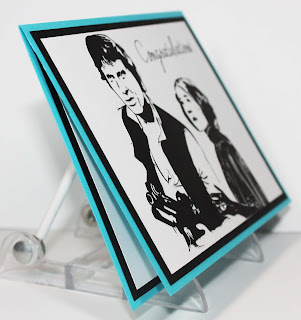 Cool card and what a great idea for putting those tiny pieces on and coloring in the microscopic ones. It turned out awesome! Hugs- Glora

cool card! they are going to love it